It was an impressive gathering indeed: Culture and Tourism Minister Jero Wacik and his earlier predecessor, Joop Ave (“the Father of Indonesian Tourism”), were there. So were former President Soeharto’s son-in-law and daughter, Miss Indonesia 2008 as well as Bali’s elite in the realm of art, including internationally-acclaimed painter Nyoman Gunarsa.

The occasion: the 13th anniversary of Musuem Rudana, a three-storey, 500sqm building built on 2.5 acres of land located in Peliatan village, Ubud, Bali, about 16km from Denpasar, in the Museum Rudana compound.

President Susilo B. Yudhoyono was slated to be present and put his signature on the plaque. He then decided that the event should take on a grander scale by holding it in Jakarta some time in December.

SBY would not be the first president to put his seal approval on Museum Rudana. 13 years ago no less than the late President Soeharto officially opened it (on 26 December 1995) as part of the commemoration of the 50th Indonesian Independence anniversary.

Museum Rudana is the brainchild of founder Nyoman Rudana, who started his business as an art dealer by setting up the Rudana Fine Art Gallery in his hometown Ubud, Bali, in 1978.

(Rudana, who is also a prominent politician, is also a successful businessman in his own right: he operates several gas stations and manages other businesses.)

Museum Rudana conducted several exhibitions overseas. In 1997 and 1998, it held exhibitions in Kuwait. In 2000 the museum held an expo in Rome, Italy, where Rudana received L’albero dell’umanita (The Tree of Humanity) Award from the Italian government.

One of the highlights of the anniversary was the “Trisakti” painting exhibition of three of Indonesia’s finest artists, Srihadi Soedarsono, Nyoman Gunarsa and Made Wianta. The three painters as well as Singaporean artist Kumari Nahappan are the recipients of the Ksatria Seni Award II presented on that same occasion, as well as Minister Wacik, Joop Ave, art patron Siti Hardiyati Rukmana and former Bali Governor Dewa Made Beratha.

“The three Indonesian maestros reflect Indonesia’s maginificent sense of artistry. Their works are equal to that of any world class artist,” says Putu Rudana, the son of Nyoman, who manages Museum Rudana. While the day saw the elderly Rudana and his musuem take center stage, it is likely that Putu, who will be running for the House next year, will take on a higher national profile in the near future. In the coming months he is set to unfurl before the president his grand plan “to synergize all elements of Indonesian art and culture in the framework of national development.” Stay tuned.

Text and by Taufik Darusman 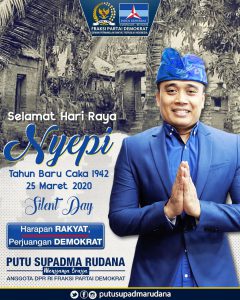 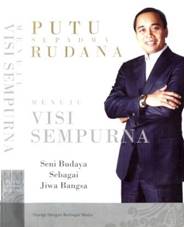